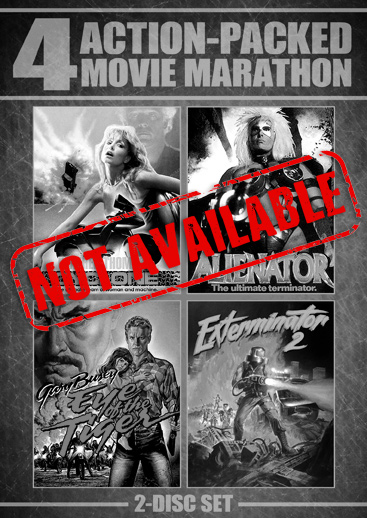 4X The Action, 4X The Excitement!

From a remote space-station prison, an iron-willed alien warden sends an indestructible assassin, The Alienator, after an escaped prisoner who's crash-landed on Earth. This pulse-pounding sci-fi film stars Jan-Michael Vincent (The Mechanic), P.J. Soles (Halloween), John Phillip Law (Barbarella) and female bodybuilder Teagan as the Alienator.

EYE OF THE TIGER

When former Vietnam veteran and ex-con Buck Matthews (Gary Busey, Lethal Weapon) finds that his home-town has been overrun by a sadistic motorcycle gang, he enlists the help of a fellow vet to win the town back . Yaphet Kotto (Alien) and William Smith (Conan The Barbarian) also star in this action-packed epic!

Robert Ginty reprises his role as the torch-wielding outlaw vigilante in this dynamic sequel. Drug lord X (Mario Van Peebles, New Jack City) and his army of thugs have declared war on New York City…but they have yet to meet someone like The Exterminator.