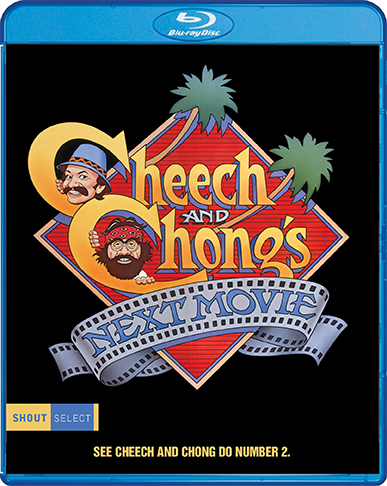 THEY'RE BACK WITH MORE ZANY ADVENTURES!

The zany twosome is back for some smoke-enhanced misadventures in this riotous comedy. This time, Cheech must deal with an angry neighbor and losing his job, all while trying to score with a sexy young lady.

Meanwhile, Chong meets Cheech's cousin, Red (Cheech Marin in a dual role), and the two buds have a wild time buzzing around Hollyweird in a bad Ferrari. Along the way, the dynamic duo find time for some mishaps at a movie set, the welfare office, a hotel, a brothel, a music store, a rich girl's house, a comedy club, the ultimate weed field and a UFO-all before the second reel! This outrageous comedy features early film appearances by Paul "Pee-wee Herman" Reubens, Edie McClurg, Cassandra "Elvira" Petersen, John "Jambi" Paragon and Phil Hartman.

“Many Universal titles from this period tended to have terrible theatrical prints, but Shout! Factory's Blu-ray of Cheech and Chong's Next Movie looks great in its 1080p, 1.85:1 widescreen presentation, which shows off the locations so well one can almost smell them. The mono DTS-HD Master Audio is also unexpectedly robust…Recommended.” – Stuart Galbraith IV, DVD Talk

“Cheech & Chong may not have had themselves sobered out of the pop culture conscious, but they’re still pretty funny if you give them a chance. Does this Blu-ray deserve a chance? It’s definitely the best the film has ever looked and sounded. Cheech Marin gives a really solid interview as a bonus feature.” – Brandon Peters, Why So Blu

“If you enjoy their movies in any capacity, then picking up Cheech and Chong’s Next Movie on Blu-ray should be a no-brainer. Its unstructured and untamed nature may not appeal to everyone, but it’s a fun movie that looks and sounds good on the format, which is all you can really ask for.” – Tim Salmons, The Digital Bits

“Cheech and Chong’s Next Movie is a hilarious romp that still stands up as well today as it did back then (even moreso if you grew up in the days when the pop culture references were all the rage). Shout Factory has done a nice job with the film…and the brand-new interview with Cheech is pretty good as well. Definitely the best the film has ever looked and sounded, a must own for any Cheech and Chong fan for sure.” – Michael Scott, AV NIRVANA

“Stoner comedies are a dime a dozen these days but Cheech And Chong’s Next Movie still holds up well, a gleefully stupid movie that’s as delightfully crass as it is genuinely creative and sincerely wacked out. Shout! Factory’s Blu-ray release isn’t stacked with extras but it does look and sounds quite good – fans should appreciate this one, it’s a really fun way to kill ninety minutes and countless brain cells.” – Ian Jane, Rock Shop Pop