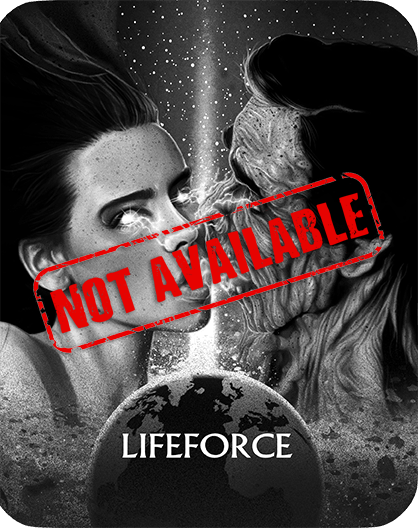 “If you've never seen this mind-reeling schlocko sci-fi spectacular, then hang on to your brains. Great fun.” – Time Out Film Guide

From the director of Poltergeist and the co-writer of Alien comes a thrilling sci-fi adventure of explosive action and pulse-pounding suspense! With mind-blowing special effects by Academy Award® winner John Dykstra (1977 Visual Effects, Star Wars), Lifeforce is a gripping mélange of genres that’s “so bizarre, it’s fascinating” (Leonard Maltin)!

A mission to investigate Halley's Comet discovers an even stranger phenomenon: an alien spacecraft! Following a deadly confrontation, the aliens arrive on Earth, where their seductive leader begins a terrifying campaign to drain the lifeforce of everyone she encounters. Her victims, in turn, continue the cycle, and soon the entire planet is in mortal danger. And when the mission's sole survivor (Steve Railsback, The Stunt Man) sets out to destroy her, he comes face to face with the most charming – and horrifying – being he's ever known. Will he be able to destroy the lovely vampiress...or will he become yet another victim of her fatal charm?