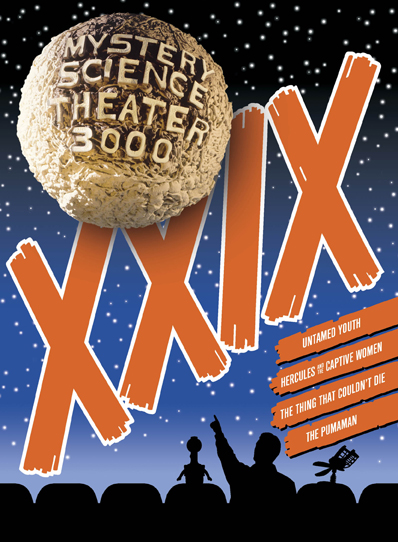 Ahead of its time in many ways, the beloved comedy series Mystery Science Theater 3000 used social media before there was social media. Consider: a creative team of actors and writers put on a puppet show and shared with us not just cheesy old movies, but how they felt about them. They sent their show into the ether, hoping to find kindred spirits to join in the fun and pain. The comments were delivered verbally in snarky one-liners called riffs, the spiritual father of funny tweets. The initial popularity of the show mushroomed as fans made tapes and traded them…viral videos before they turned digital. Is it any wonder, then, that the first MST fans were drawn to the burgeoning internet, using it to find each other and share the love? All the above notwithstanding, this new DVD collection is the only way to own these four never before released episodes with fun extras. Relationship status? It’s not complicated: fans forever. #MovieSign!

Hercules And The Captive Women

The Thing That Couldn’t Die