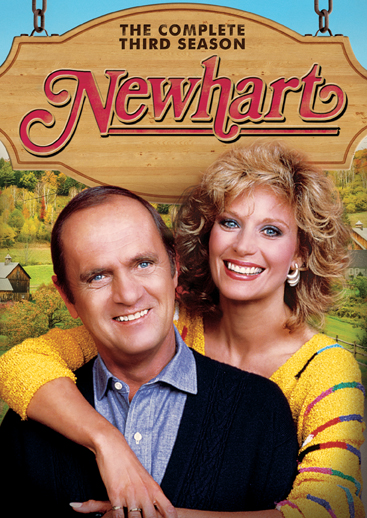 Bob Newhart and company invite you to check in to the Stratford Inn for Newhart: Season 3, a delightful collection of some of the 1980s’ finest television comedy.

Dick Loudon (Newhart) and his wife Joanna (Mary Frann) have their hands full running their quaint colonial inn. In addition to the seemingly never-ending parade of unusual guests, they must contend with the quirky antics of their employees and friends: the spoiled maid Stephanie (Julia Duffy), dim-bulb handyman George (Tom Poston), and the back(wards)woodsmen Larry, Darryl, and Darryl (William Sanderson, Tony Papenfuss, and John Voldstad.) And to top it off, Dick has become the host of the small-time talk show “Vermont Today,” produced by the upwardly-mobile Michael (Peter Scolari).

All 22 episodes from the Emmy®-nominated third season are here to deliver the off-kilter, character-based comedy that endeared Newhart to critics and audiences alike.