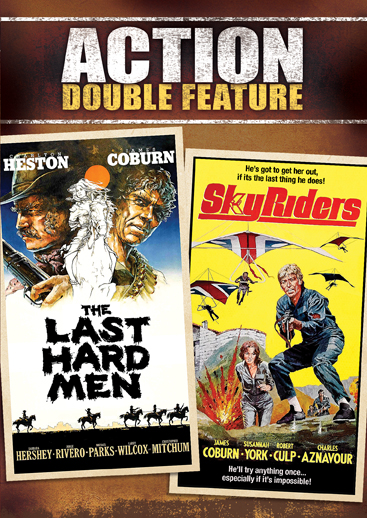 In The Last Hard Men, a group of convicts on a road gang escape from custody. One of the convicts is Zach Provo (James Coburn), sent to prison by former lawman Sam Burgade (Charlton Heston), who may also have killed Provo’s wife. Provo plans to kidnap Burgade’s daughter, hoping to prompt Burgade to strap on his guns and come after him so he can seek his revenge. Based on the novel Gun Down by Brian Garfield (Death Wish). Directed by Andrew V. McLaglen (McLintock, Chisum).

When the wife and children of industrialist Jonas Bracken (Robert Culp) are kidnapped by a terrorist group, and following several failed attempts by the police to get them back, the wife’s ex-husband Jim McCabe (James Coburn) is brought in to rescue the family. McCabe pulls out all the stops and hires a crew of professional hang gliders to help him get to the terrorists’ mountaintop lair. Also starring Susannah York and John Beck. Directed by Douglas Hickox (Zulu Dawn).