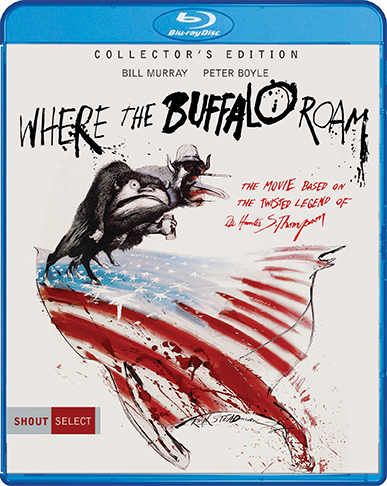 Where The Buffalo Roam [Collector's Edition]

Comic star Bill Murray is at his wildest as America's leading "Gonzo" journalist, Dr. Hunter S. Thompson, the legendary underground reporter whose passion for writing was second only to his love of weird chemicals, alcohol, violence and insanity. Along with best friend (Peter Boyle), Murray offers a manic look back at the Sixties and Seventies as an eyewitness to everything from a free-for-all San Francisco drug trial to a one-on-one bathroom interview with then Presidential candidate Richard Nixon. This off-the-wall comedy also boasts a musical score by rock superstar Neil Young.

“…if you're a fan of Thompson's writing or the more well-known film adaptations, give this one a spin. Shout Factory's new "Select" Blu-ray finally presents Where the Buffalo Roam with its unaltered theatrical soundtrack, plus a solid A/V upgrade and a limited but enjoyable pair of bonus features. Recommended.” – Randy Miller III, DVD Talk

“With Shout Select’s terrific presentation and all of the film’s original music finally back in it for the first time in many, many years, this is definitely a release worth checking out.” – Tim Salmons, The Digital Bits

Where The Buffalo Roam [Collector's Edition]