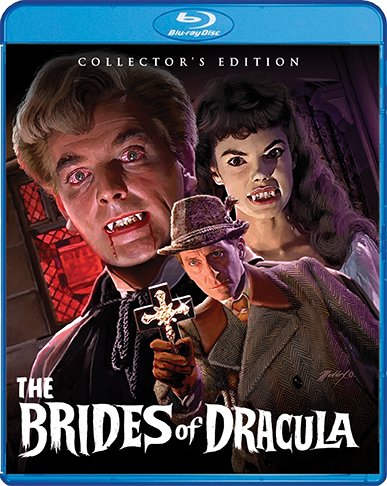 The Brides Of Dracula [Collector's Edition]

Product Note: The limited edition poster has SOLD OUT as of October 30, 2020.

"Superbly acted and featuring lush colors and wonderful sets, this standout Hammer horror is ... a classic all on its own." – The Terror Trap

Marianne (Yvonne Monlaur), a beautiful young girl, is stranded en route to a teaching assignment in Eastern Europe. She is persuaded to spend the night at the nearly deserted castle of the mysterious Baroness Meinster (Martita Hunt). In the castle, Marianne accidentally discovers a man chained to the wall in his room. The Baroness explains only that he is her "sick and feeble-minded" son. Unable to get any further information from her or the maid, Marianne steals a key and sets him free. But once unbound, the man – Baron Meinster (David Peel) – fiendishly recruits the undead for his evil purposes while Marianne and Dr. Van Helsing (Peter Cushing) try to stop him in this classic Hammer Film.

The Brides of Dracula