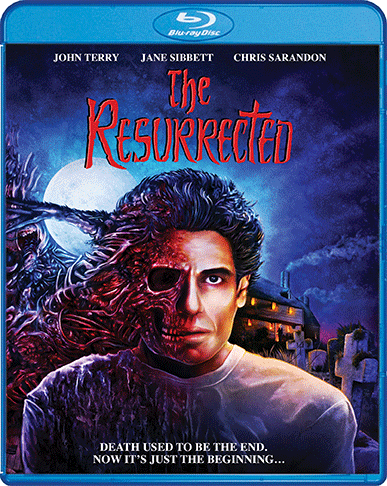 From the director of The Return Of The Living Dead: "a very fun [film] that any horror fan would absolutely love" – Bloody Disgusting

Since the beginning of time, man has struggled with death. Now Charles Dexter Ward (Chris Sarandon, Fright Night), a wealthy scientist, may have found a way to beat it. Using an ancient diary and human remains, Ward begins a terrifying and bloody pursuit for immortality. By the time his wife Claire (Jane Sibbett, Arrival II) hires private investigator John March (John Terry, Full Metal Jacket) to halt the horrible experiments, it's too late … the dead have been resurrected!

“Scream Factory’s Blu-ray release of the film is definitely one of their best packages. Stuffed with plenty of extras and a quality presentation, it’s a release that I can see Dan O’Bannon possibly having been involved with had he lived long enough and was well enough to do so. It’s a fine tribute to his work on the film, despite being hampered by studio interference. Highly recommended.” – Tim Salmons, The Digital Bits

“Although Scream Factory hasn’t labeled this release as a Collector’s Edition, it might as well be.  There is enough great bonus content here to justify it…If you are a fan of this one, you should go ahead and add it to your collection.” – Marc Ferman, Popcorn Nights