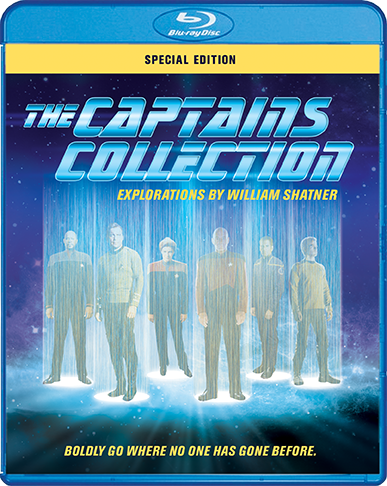 Special Offer: This EXCLUSIVE SPECIAL EDITION contains a fifth Blu-Ray disc only available on ShoutFactory.com, which contains additional material, and is limited to 2,000 units (see below for complete details)!
Product Note: This is also available as a bundle with WILLIAM SHATNER'S HAS BEEN ON VINYL..

Boldly Telling What No One Has Told Before ... In HD!

William Shatner's incredible in-depth look at the creation, evolution and legacy of Gene Roddenberry's Star Trek comes to life, for the very first time on Blu-ray, in this collection of four documentaries!

The Captains Close-Up: The interviews continue with this docuseries formed from additional interview footage unable to be included in the original The Captains film.

Chaos On The Bridge: The delightful — and surprising — story of bringing Star Trek: The Next Generation to the screen!

Get A Life!: Shatner's own, unforgettable love letter to the fans of Star Trek.

DISC ONE: THE CAPTAINS

DISC THREE: CHAOS ON THE BRIDGE

DISC FOUR: GET A LIFE

Chaos on the Bridge

The Captains Close Up