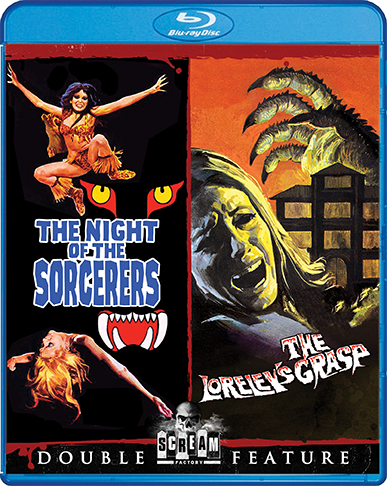 The Night Of The Sorcerers / The Loreley's Grasp [Double Feature]

THE NIGHT OF THE SORCERERS

A group of explorers arrive in Africa to study the wildlife in the same area where a brutal native ritual occurred in 1910. All is tranquil until night falls and distant drumming draws one of the female members of the group to investigate the jungle. From there, a nightmare will be awakened … a nightmare of zombie natives and scantily-clad vampire women who prowl the moonlight jungle in search of fresh blood and more victims to sacrifice.

In a town by the Rhine river, young women are turning up dead … savagely torn to pieces and their hearts missing. Concerned that whatever beast is doing these horrible murders will end up attacking the female students, a nearby school for women hires a hunter to find and kill the creature. The hunter will soon find out that this is no ordinary beast that craves human hearts, but rather a deceptive, alluring and mysterious being – The Loreley – who is already looking for another heart to use in a gruesome ancient ritual.

The Night Of The Sorcerers / The Loreley's Grasp [Double Feature]